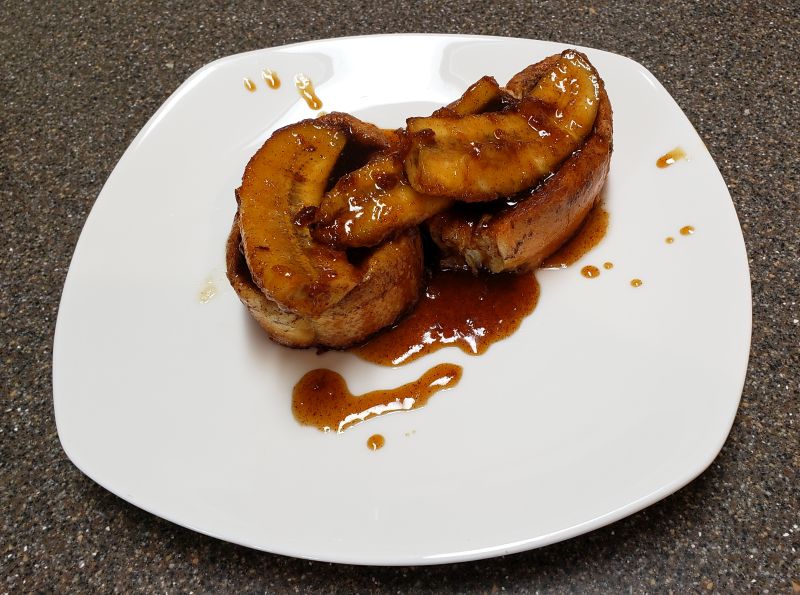 Pain Perdue With or Without Bananas Foster

This is a fancy breakfast that is easy to make.  It is a combination of two recipes that were invented in New Orleans to deal with an overabundance of two things most cities don’t have.

Pain perdue (pronounced pan par due) means lost bread, and it was a way to use French bread that had gone stale.  If you’ve ever been to New Orleans you know that there is a lot of French bread.

In the 1950’s, New Orleans and Mobile, AL were the main ports where bananas were imported into the US.  Bananas Foster was invented when Owen Brennan, owner of Brennan’s Restaurant, challenged his chef Paul Blangé to make a dish that took advantage of the overabundance of bananas in New Orleans.

Slice the French bread into slices that are about 1” to 1½" thick.  Whisk the eggs, milk, salt, sugar, cinnamon, allspice, and vanilla extract together.  Pour the egg mixture into a flat bottom dish large enough to fit all six bread slices.

Preheat your oven to 400°.  Heat a 12” cast iron pan over medium low then melt the butter.  Add the bread (all 6 pieces should fit easily) and very lightly brown the slices in the butter for 1 to 2 minutes per side. Don't make the bread too dark as it will darken more in the next step.

Take the frying pan off the burner and put it in the oven.  Bake for 10 minutes.  After 10 minutes, remove from the oven, turn over, and put back in the oven for another 5 minutes to brown on the other side.  The bread should be cooked on the inside and crisp on the outside.


Start by melting the butter over medium heat in a non stick frying pan.  Add the sugar and cinnamon and stir while it bubbles and the sugar dissolves.  Stir in the banana liqueur then add the bananas.  When the bananas soften add the rum. Flame the rum. Place scoops of ice cream on four different plates.  Using tongs, lean four pieces of banana on each scoop of ice cream.  Spoon the sauce over the bananas and ice cream and serve immediately.
Home